Is Sarcasm the Lowest Form of Wit?

Unless you were living under a rock here in Melbourne you'd know we recently had a large sporting event, fortunately with a planned 2007 show and a group show in May, plus my extra teaching at VU, I didn't get to see or hear much of it all. Kaz Cooke on the other hand had the good sense to write a bitingly funny diatribe about it all, onya Kaz!

Processes, are a bit like riding a bike, somethings you just never forget. Now of course begins the long process of looking at each image and deciding if i made the right choice before pressing the shutter and then there is still the whole how do I print them to look their best issue.

This first proof sheet is of an area I've long been attracted to. One that I drive past 4 to 6 times a week. Friday the 24th of March just seemed like the right time to go there, so I did, and I'm glad I did. Plenty of chaos and texture, manmade, and natural fighting it out, so to speak. The next proof was from one of those little exploratrory drives that I used to do so often but these days rarely take, I had originally intended to shoot something else but the light wasn't the way I wanted it so I kept driving. I found some excellent locations that will expand my proposed 2007 show, and will revist around dusk to see what I can get as there was some great views of the city from a couple of the spots. The place is so desolate and yet to close to the city I'm really looking forward to shooting more there.

So yesterday I mentioned the nets ability to foster grass roots activism, well today I was sent a request to sign a petition to save one of our two non-commercial broadcasters. Burrowing around in the news feed for their blog I find that a campaign started to alter the course of a bill going through Parliament worked. And by worked I mean the responses form the Minister's contacted plus the result of the bill means that this grassroots organisation had some impact on the direction of the bill

Here's a great entry on the flickr blog, about photography it's power and meaning and more importantly the way the web is being used at a grass roots level to by-pass traditional media.

So here's the results of a busy weekend of shooting. Processing will happen over the next few days, and who knows maybe in a months time I'll have scanned a couple and uploaded them. Thus allowing an emotional distance from them when they were taken, which in turn allows me to judge their real merits.

Please excuse the horrible colour cast, my little digi-cam has only so much control.
Posted by Stuart at 3/20/2006 08:07:00 am No comments: Links to this post

Flickr is one of those places where you are constantly surprised by who you encounter. I have recently re-connected with Kent Johnson. A wonderful photographer and lively personality to boot. His website is an interesting read. He rather succinctly talks about the process involved in his creative process which was in part the inspiration to these shots, a mere two kilometres or so from my house. Of course if you look hard enough you will see some Robert Adams, some Frank Gohlke and maybe even some Lewis Baltz.

Thanks Kent for the shot in the arm looking forward to our first real life encounter.

As for my creative process, it seems I am more intuitive and time based, I have a vague idea what and where I want to shoot, go look for it, and maybe even revisit several times, process it put it away and come back to it over a period of time and re-analyse it, perhaps take the idea and images further or even go off on another tangent all together. Or maybe just scrap that idea and go somewhere else.

Been hitting the books of late, so not much image making going on.

"the best landscape images, whatever their medium and whatever other emotions they evoke … propose the possibility of an intimate connection with a world to which we have access only through our eyes, a promise containing it's own denial"
Frank Gohkle
pg 696/698 1000 Photo Icons George Eastman House, pub Taschen

I am changing the course of my image making practise. This change has come about after a series of small but none-the less revealing incidents involving the web, materials [sliver gelatin] and processes, my own.

The final catalyst occurred a day or so ago I went to my local photo supply store, to stock up on paper. I am in the process of printing some work prints for a planned show in 2007, and had run out of my favourite paper, Forté."No worries" I thought, Vanbars will have some, so down to north Melbourne I go, wandering in I say hi to Richard and head down the back to buy said paper. While Vanbars had plenty of paper in stock generally, they had nowhere near the variety that they used to have when I last had an exhibition.

This catalyst, is the last in a chain of incidents that have been bubbling away now for several months, a discussion on flickr about the appearance of digital photographs, was one such incident. This discussion made me realise that it was probably a futile cause to try to get people who don't want to see what they don't want to see. Namely that there are differences in the look and feel of Digital Photographs over Analogue photographs. Another incident I have already talked about here.

So this slowly snowballing effect, got me thinking, how can I make something that is truly unique? The process of putting together an exhibition, has my creative juices really flowing at the moment and and I'm quite enjoying the act of returning to my darkroom. This reminded me of my final days at University where I started mucking around with a film developer agent called Pyrogallol. A mythical developing agent that was as renowned for its long tonal scale as it was for it's difficulty to control, not to mention the O H & S issues! I then poked around in my note books from around 1991 and dug up 3 or four technical book that either talked about it in length or mentioned it. I now have several recipes and, am ready to begin the long process that will be mastering this developer and it's intricacies.

Perhaps this blog will track that progress, sadly the only way to really appreciate the prints will be to see them in the flesh, something that the internet is incapable of; unless you live in Melbourne?

A project I've always wanted to contribute to. PostSecret

Nan Goldin's having a show in New York, after a 3 year hiatus

This shot from my Shopping Trolley series, using a mobile has had 514 views so far. Kinda weird really 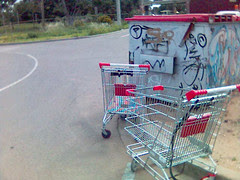 Seems there's some folks questioning the "art" of Digital Photography. I agree with the arguments presented and for anyone to understand those arguments and use the ideas to their advantage using digital tools will be then able to call themselves an artist to my mind.

Over on flickr I recently uploaded a 21 step grey scale test swatch. My intention was to use it as a guide for my own current upload project. It has gathered considerably more views. Than I expected with several comments to boot, what a strange place flickr is.

Lonely Radio has it all.

They say TV is the bits between the ads, this very funny commercial proves it!

Here's the google.video link for it too

Is 30 boxes the latest meme or will it fizzle so much other stuff has over the last decade or so of internet life?

Personally I've never been one to live by any kind of calender/organiser, but iCal changed all that and maybe this next Web 2.0 technology will change that even further?