So this blog sees the end of it's life thanks to Lonely Radio from flickr I have now a brand spanking new blog. So bring on the tags, bring on the categories, it's off into the blogo-sphere I disappear!

An article on levels, something I touch on in my photoshop workshops. Thanks to Tina over at swissmiss

This article about light is good one 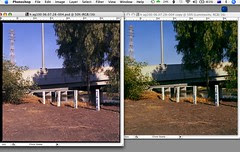 When I print analogue prints, I invariably stare for long periods of time at wet prints in trays side by side, actually not just wet ones. Once dry and after several hours of making slight variations of the prints, I need to to make sure I made all the right moves in the darkroom and of course how else to do this but to compare them directly side by side.

Well can you both believe that I only realised this digitally yesterday or should I say consciously decide to do it because of doubts about the above images.

Strange that such a simple technique should escape my way of thinking for so long? Is it the very nature of digital that encourages this? Or have I gotten to trust my eyes and my memory too well?

My workflow in this situation with Photoshop is:-

Having said all that, less is more, and maybe it's time to think about launching my awesome image editor called Live Picture?[I was hoping to insert a link to some site that mentions it, but it's original owner [MGI Software] has now been bought by 3rd company and seems to have disappeared off the radar.]

Here is a screen grab from some work in progress that will be uploaded to flickr over the coming weeks.

On Thursday, Ian Lobb the creator of the plug-in Lobster, came and spoke to our students, at length, about a variety of issues. Some of which I found refreshing and re-affirmed what it was I am doing when I point a camera at the world around me.

Some of the ideas he spoke about included, the time it takes to really learn a craft, the appreciation that you gain about the craft itself by learning it over time, and the importance of thinking about your tools in a deeper and more profound way, just to name a few.

Most of which few people learn or understand when using a digital camera in conjunction with software like Photoshop™.

For example. Buy any book on how to use Photoshop™, and look at the sections/chapters about curves and levels. The two most important tools in the program. why are all the images used so monochromatic, why are they so de-saturated?

It is because Photoshop™ does not mimic the way we see the colour of the world.

I am not going to talk about this at length, as Ian does so it eloquently in his free download-able notes, and manuals.

This is copied directly from the site, used here without permission, and for instructional purposes only.

There are scores of other new possibilities to a file in Lobster.

Let me ask you both a question?

How would you rate your respect of the natural, the real and the exact?

Some great news regarding my camera! I received this e-mail this morning from the Camera Exchange here in Melbourne.

Hello
Thank you for your e-mail inquiry.
Yes we do repair Nikon Coolpix units. The image shows there is a failure with the CCD, this repair is to be covered by the importers and done at no charge to the customer. Our general turn around is 10 working days, providing if parts are required they are in stock. If you would send/bring the camera in we will have it repaired for you.

I was half expecting this, as a post on the Nikon flickr forum lead me to believe that some units were being repaired free of charge due to a faulty CCD, it also linked to a page that confirmed this. Oh the joy of it all!

I'm sure some more trawling through my archives will result in some gems that can be turned up and posted here and on flickr. Or I can get out into the darkroom and finish some proofs that need to be done, not to mention a couple of prints I've promised some people.

Looks like I spoke too soon, my Nikon Coolpix 5400 is still playing up!

This is an image made recently, shot with my Nikon Coolpix 5400 digital camera. No end of photoshop can fix this

I was not very happy when I saw this as the camera is a mere 2 years old. Several shots later it was obvious that it was a problem that was not going away, by turning the camera on and off or changing, program settings!

I got home and put the camera aside and left it, for a while. Laying in bed on Sunday morning, the only thing I could attribute this issue to was, my having taken the card out on Friday night. So I tried a different card, same thing?

I also put in a fresh battery, still no luck.

So after downloading the images, to my hard drive to preserve them for prosperity, I decide I would re-format the CF card in the camera.

If I had encountered issues like this with a camera like my Hasselblad, I could have most likely looked at the camera itself and perhaps, trouble shot the issue and if worst came to worst send it off to somewhere like the camera clinic to have it repaired.

But what of today's digital cameras?

I know several people who just sell on their older cameras as second hand cameras and plough on ahead with the new camera, adding a sense of disposability to the whole issue at hand that isn't applied to analogue hardware. Even so if they did break down, would people pay for the work done? I know I was beginning to think about buying a new camera, such is our throwaway society that we live in?

Again from the set ‘more or less…’

Something compleltey unrelated to photography today.

More from the new set

This set has come about after some time has been spent, looking at surfaces and thinking about surfaces, this set may have only come about because of digital photography, as only digital allows me experiment in ways that film could not. Combined with tools like iViewMedia Pro and Photoshop, and a workflow that encourages less speed and more contemplation, I think the results speak for themselves.

It's been a while but a new set has crept into my overall sets.

Nice little tool, from flagrantdisregard.com/flickr/, can't believe I have 590 contacts!

Apparently, it refreshes on the hour?

Cameras Are Weapons Of Mass Destruction!

So the irony of it all is laughable... I mean really?

Let me start at the beginning.

It was a glorious winter Friday, barb, thomask, and myself had hooked up for a day of wandering about in the industrial wastelands of Melbourne, we started in the rail yards around Nth. Melbourne rail station. Got a grab or two of some interesting stuff, then got a bit spooked by some weird coincidence whereby several trains all stopped at once in odd places either side of us, we were up high on a bridge looking down over the yards, and moved on to other quieter areas. We made our way to the river under the Bolte bridge eventually, and turned around and headed back to the station, my car was parked there because earlier I had nipped into Vanbar's for some film for the day.

By this point I had shot a lot of film and a few digital photos[more photoshop work]. We next headed to Williamstown for lunch, oh and did I tell you the weather was awesome!

After Lunch we headed to an area that had originally housed a glass factory owned and run by ICI. The factory was in the process of being dismantled and we found an open gate, we had hit pay dirt! So we tentatively wandered in and started snapping away, Tom being the bravest was poking around in all sorts of nooks and crannies and no doubt got the most and probably the best shots. Finally it all came to an end, as we could hear workers elsewhere in the building working and given the current paranoia about cameras, we decided quit while we were ahead.

We meandered off into the back streets around the factory and found some refineries storage areas that were also interesting, with lots of dichotomies between old and new and shiny and dull, a real feat for the lens indeed. After wandering along for a few hundred metres or so and seeing and no doubt being seen by numerous Caltex employees going about their business, we turned a corner and kept walking. Shortly after turning the corner a vehicle approached and slowed, the driver stopped and wound down his window.
"What are you doing?" Was the question in barely concealed tones of contempt. I replied;
"We're just doing an assignment for school"
In my cheeriest non-threatening voice, as he rolled away.

Sadly this was not enough, he came back and told us that security was on it's way to "check us out", in an even sterner tone. We smiled and kept wandering along the public road we were on, engrossed in the plethora of machines, pipes and tanks that surrounded us on this glorious winter's day with a blue blue sky, and not a cloud in sight.

The security never materialised, but we all were able to get some great urban landscapes and some very interesting compositions from our wander along, Ramsay St and Burleigh Sts Spotswood, amongst the Petro-Chemical refineries, but shush don't tell anyone, coz there is a heightened sense of security you realise and cameras are weapons of mass destruction!