Today is the last day of Autumn. The light has been magnificent of late. Yesterday I shot several rolls in one of my usual kind of locations, under a freeway that had several on and off ramps with creek running beneath it all, totally incongruous. [A term I use sometimes to describe myself.] Hopefully the light will hold for a few more weeks, as term break for both jobs is just around the corner.

One of the things I love about photography is it's ability to abstract surfaces and add a sense of formality to the everyday. So much so I have a set dedicated to it. This image being the lead opening shot. Taken on a car-park rooftop in Footscray in late 2005.

Minimal Photoshop processing here, except for the usual levels and curves and sharpening.

The MGA are having a competition/show with a deadline set for later this week, I have decided to enter it this year. I am surprised that one of the entry conditions is a small print plus a slide or jpeg! Suits me, my work is as much about the final print as it is about the subject matter, the idea, the emotions evoked by the image and the politics of images. And I have a digital high rez version of the file on my hard drive. It will of course need some work as I have simply scanned it in as a 16 bit file. As digital files are notoriously low in actuance, I will use the Lumnious-Landcsapes sharpening trick with the high pass filter to get the image as sharp as I can

I am printing this image, as it will hopefully form part of my CCP show in 2007, if I get it, the show that is. 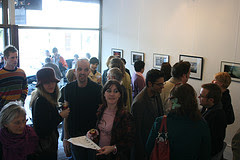 Last night was the opening, of the show Web to Wall at 69 Smith St. Thankfully somebody managed to document the evening in a way that reflects it all.

Thanks to Colin for doing the whole job.

I've always liked this one in ways that have been dificult to define, the complexity of the composition and the light all add up to a rather successful image even if I do say so myself.

For what it is worth, these steps have been gone for some time, they used to be part of the old Spencer St. Station complex. Now that it is being re-built I wonder if something similar will re-appear?

Shot on my old DC260 made by Kodak. Now dead/stolen, and processed in Photoshop.

From the largest set in my flickr stream, Utterly Urbane. I'm surprised it is not in amongst my most viewed or most favourited?

Uploaded a long long time ago. It is smaller than my other images. [In those days I was using the free account and keeping my images small in an attempt to get tons up there and stay under the threshold.] I want to re-upload it, but am having real trouble finding it, to edit it. The lesson to be learnt here is keep all your files organised and organised well. In the past I've used, iView [sadly doesn't handle raw files], but am now considering using something like Aperture. iPhoto just doesn't cut it for me it is not designed for someone who shoots over 10,000 images a year! 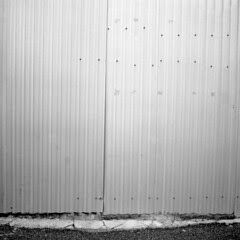 Traditionally, landscape and documentary photography relies on techniques such as deep Depth of Field, and dramatic light. Sometimes though for me if the image just cries out to be made, you do the best you can under the circumstances. This is a perfect example, and if anything these perceived shortcomings are, what makes this image successful to me. The shallow D.O.F, the soft light all add a sense of mystery, a kind of quiet casual glance that seems to indicate, something, something delicate and aloof.

This image describes something a place a moment, but the actual place and moment is not clear. Sure it's a galvanised iron fence in a lane-way in Richmond, but what else does it describe? A state of mind, a fleeting gestural response to a place?

Is this then a documentary photograph, if not what is it?

Handheld at 1/125 at f2.8. A lane-way somewhere in Richmond, Melbourne Australia 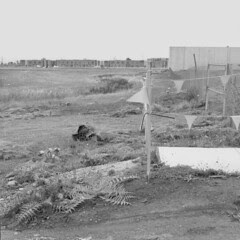 Robert Adams, one of my favourite photographers, early in his career published a book,called, 'Summer Nights'. Lately I've been enjoying the morning light and given it's winter here in Melbourne Australia, I think I will attempt something similar. Funnily enough called 'Winter Mornings'.

My new camera, is now all calibrated and ready to go. So producing the soft and hopefully luminous prints I am used to making should not be a problem.

On a technical note, my film/developer combination is T-Max 400, rated at 160 ISO, developed in D25, with my 'N' development time being, 13 ″ 40 ′ at 24 ° C. This particular shot was shot at f22 for 1/4 of a second early in May before Midday facing south east in a nearby industrial suburb. As of this writing I haven't been able to even do a darkroom proof of it, as I've been a bit busy with a group show I have been helping set-up. D25 can be found in Steve Anchell's book, the Darkroom Cookbook, but basically is Metol, Sodium Sulphite and Potassium Metabisulphite. I'm told that it is very similar to Microdol-X and is supposedly a good fine grain developer. It even smells like Microdol-X when i mix it up.

One of my aims with this kind of work is to, make the harshest suburban environments look like something else. Something while not necessarily pleasant at least a little less inhospitable, after all we as human beings make these places and use them. I am also interested in the formal capabilities of the the camera and how they transform our world, into something either hyper-real or surreal.

Also Today Marcus and Scott are being interviewed on 3RRR for the exhibition Web to Wall. Could someone please tape it for me as I am at work and may not get a chance to hear it? 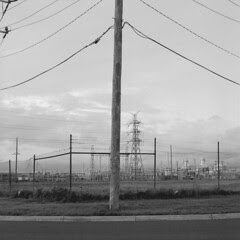 Despite it being winter, the light has it's moments and my new Hasselblad really excels at capturing that.

Recently submitted a proposal to the CCP for a show in 2007. The title of the body of work I am planning on showing is "Grids Switches and Gates", this is another contender for the show.

It's been a while since I've done this, but I occasionally like to show off other folks work from flickr. Here's Mae-Fleur's work using polaroids and scanning in the resulting negative. Pop on over leave a comment tell her I sent you. Please bear in mind this image of Mae's has had full copyright assigned to it so respect that please.

Life is a million shades of grey III. 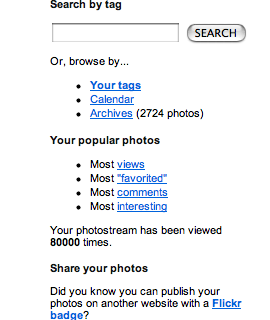 Life is a million shades of grey II.

Life is a million shades of grey.

David Pogue has a Blog!

David Pogue, is a technology writer for the NY TImes, has written several Books on Computer Hardware and software, and seems to me to be a cool level headed guy.

David Pogue is a New York Times technology columnist, Emmy-winning tech correspondent for "CBS News Sunday Morning," tech guest for NPR's "Morning Edition," and author of several books on Macintosh-related topics including Macs for Dummies and Macworld Macintosh Secrets, later Macworld Mac and Power Mac Secrets, an enormous book on the Macintosh, circa 1993.
He has written a number of books in the "...For Dummies" series, and launched his own series of computer books called the "Missing Manual" series in 2000.
Pogue also wrote a 1993 techno-thriller, Hard Drive. 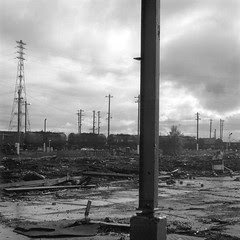 This is a *work print* which means, they will look very different by the time they hit the wall in 2006 - in subtle photographic ways of course. 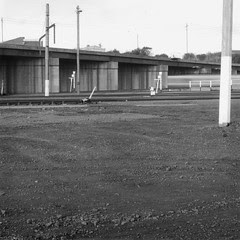 This is a *work print* which means, they will look very different by the time they hit the wall in 2006 - in subtle photographic ways of course.

Hasselblad is a Swedish manufacturer of high-quality still photography cameras based in Gothenburg, Sweden. The company was established in 1841 as a trading company. In the 1890s, Hasselblad began distributing photographic products from Eastman. The photography branch grew, and during the second world war Victor Hasselblad was commissioned to develop an aerial camera for the Royal Swedish Air Force. After the war, camera production changed into civilian cameras. Introduced in 1948, the Hasselblad 1600F was a medium format SLR that became the camera of choice for many professional photographers. 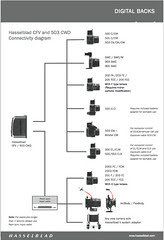 Hasselblad cameras are still widely used by professional and serious amateur photographers. One reason is the superior image quality of 6x6cm size rollfilm over smaller film and digital sensor formats, along with a reputation for long service life.

A pictorial History of Hasselblads, a unique system consists of a body, lens removable film magazine and interchangable viewfinders. Each lens incorporates its own leaf shutter. The design has been copied by several other medium format camera manufacturers. Although recent models incorporate electronics, the bulk of the cameras are totally mechanical incorporating intricate interlocks. The use of interchangable film backs allow a photographer to change film types in mid roll.

One of the highlights in Hasselblad history was its role in the US space program. The moon camera used by Neil Armstrong was a Hasselblad 500EL/70 (special model 500 with a motor drive and a 70 mm film back). Due to weight restrictions only the film (backs) returned to earth with the astronauts. There are 12 Hasselblads available free, for the next person who visits the moon.

An extensive look at the 500 series Hasselblad.

A brief look at the differences between 35mm and 120 format cameras.

Well it's official, yesterday's Green Guide in the age has an article, by Terry Lane that talks about Flickr and even mentions the Flickr Melbourne Group. Now it seems that Terry Lane also writes online, and the blog entry is on a site called dpexpert.com.au. So yes indeed we are infamous now. 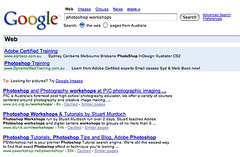 Hate to brag but, look has who the two top spots on google for the phrase "photoshop workshops".... today.